We have covered a lot of ground in this 6 part series, “Applying Mean Reversion Strategies in India”. You can check out other parts by clicking following links;

This will be the concluding part of the series where we will conclude our key findings & also discuss the important limitations of the study.

What are the key Lessons of the study?

Looking at the above test results we can definitely see that there is an edge in buying stocks that have become oversold over the short term based on the above strategies.

We have tested about 60 variations of both the systems for about 13 years and 2 months, the results look promising. All the variations are profitable which shows the robustness of the systems.

You can take this research and devise multiple strategies to trade the markets in the short term. All the variations have beaten the benchmark with lower exposure, lower drawdowns and higher CAGR.

Although slippages and commissions will have a drag on the performance of the above strategies but it’s a good starting point for doing further research.

If you chose a variation with lower RSI or CumRSI thresholds, the average gains increases, drawdown, CAGR and number of trades reduces.

At the same time if you loosen the threshold, CAGR and the number of trades increases. But this also increases drawdown and reduces average gain per trade. Also high number of trades means higher slippages and commissions.

From the above studies and test results, a few themes emerge which we have to keep in mind.

1. Buying into pullback when the stock is quite oversold

It has provided consistent edges over a long period of time with lower risk in terms of drawdowns. The more oversold the stock, the more likely it will bounce.

We have seen that buying below 200 DMA does not provide any edges. In fact most of the variations lose money with increased drawdowns.

As we have seen from the test results that shorting doesn’t work on Indian markets. At least For this kind of trading.  We have already discussed two possible causes of this behavior.

We have seen stop losses from the range of 1% to as far as 50% reduce the performance of the strategies. It’s better to diversify between multiple positions/strategies so that one position doesn’t harm the overall portfolio. Keeping portfolio level stop losses are far more beneficial than individual stops.

What you have here are robust strategies which have worked over a long periods of time across different market conditions.

There are limitations of course…

Although, I have tried to be as accurate as possible, there are a few limitations to the study.

In this study survivorship bias is not omitted as we do not have the data which includes all the stocks which were traded during the period but have delisted or merged etc.

Nevertheless, the test is carried out on a large universe of stocks on NSE of about 1640 symbols for over 13 years which definitely confirms the general behavior of stocks in the short term.

Brokerage and slippages are not considered in these tests. In this type of trading, slippages and commissions will have drag on the overall performance of the system.

Although nowadays many discount brokers are available for DIY traders and many brokers are offering free equity transactions, so the commissions are not that a big concern but slippages and taxes are real which has to be kept in mind before trading these kinds of systems.

Also, the system buys at the closing price and exits at the opening price which in reality is difficult to execute.

Just before the closing, signal may be correct but the close price is adjusted which could nullify the signal. Also you most likely can’t sell at the first tick at the open price which could have an impact on the overall results.

Keeping all the limitations in mind, we can still see the recurring behavior that the stocks which have pulled back or are oversold are likely to revert to their mean over a short period of time. These strategies have provided consistent edges as shown by Larry Connors in his research. 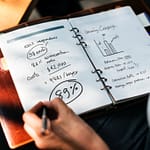