A week that was!

This week’s market action could be attributed to Adani Group, the FED & the Dollar Index!

It all started with this tweet by @suchetadalal on saturday,

Then, on monday the Economic Times came out with news on the front page…

Not surprisingly, Adani Group shares crashed between 5-25% intraday along with the market. Later in the day, NSDL & the Adani group separately came out with statements that the accounts of the said FPIs are active!

This incident raises a lot of doubts & suspicions not only on the group but also the publication & the NSDL!

Anyways, we may never find out answers to these questions!

What’s in our hands is the risk management of our portfolios.

And as a risk management measure, I am completely out of Adani Group shares. Do check out my Performance Report for more details.

Anyways, back to markets!

Markets always give us a hint if we’re able to capitalize on it. I had warned my readers in the last week’s Market Analysis that there’s the possibility of a large correction as the top indices are diverging from each other.

Another important thing to observe is that the Sensex has also been a leading indicator of the impending corrections in the markets.

As I had mentioned in my previous report that the IndiaVIX is at dangerously low levels. IndiaVIX rose almost 5% for the week.

METALS & COMMODITIES especially were under pressure because of the Dollar Index…

DXY is up close to 3% for the month! The recent FED meeting concluded higher expected inflation & earlier rate hikes. Which helped commodity prices to tumble, DXY & Treasury Yields to rise!

DXY faces a significant resistance at March 21 high of 93.43.

I had hinted in my Market Analysis here that the metals index faces significant resistance at the 2008 highs. Now it looks even more daunting for them to outperform given the rise in inflation resulting in the higher Dollar.

What’s up with Nifty?

As long as we are above the rising trendline & the previous closing high, the line of least resistance remains up!

Have a great weekend! 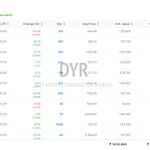