Nifty had a horrible start of the week where it tumbled more than 408 points only to recover some lost ground at the end of the day to settle at 14637.8 or down 229.55 points. By mid-week nifty recovered all the losses and tried to break out above 14880 levels but failed and settled the week absolutely flat at 14834.85 or down 32.55 points.

As I had mentioned in my previous post that…

AS we can see that the Nifty has failed to cross the minor trendline but the good news is that it has also maintained major support between 14433.7 to 14529.

On a weekly candlesticks chart, it has formed what we call a ‘Long Legged Doji’ which signifies the amount of indecision between the buyers and sellers. Although, a follow-through on either side of the Doji could be a powerful signal of the future course of direction for the markets.

We had seen in the previous post that Nifty, Nifty Bank, Nifty IT, Nifty 500 as well as some of the top 10 heavyweights are facing significant resistance on the higher time frame charts.

Coming weeks will be important to watch as the Q4 results season starts.

See you next week!

Until then, Stay safe & have a great weekend! 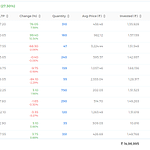