“Unless You can watch your stock holding decline by 50% without getting panic-stricken, you should not be in the stock market.”

That’s the advice coming in from the legendary investor Mr. Warren Buffett.

In his shareholder meeting a couple of years back he said that they have seen their stock fall by 50%, at least four times in their 50 years of history. We are talking about billions of dollars here!

Can an average investor digest this much of a drawdown?

Imagine you have a portfolio of Rs. 10 lakhs & it’s down by 50%. How would you feel? Terrible I suppose.

But why do people panic when in drawdown?

Obviously, no one likes to see their hard-earned money getting eroded! The average investors neither have a temperament like Mr. Warren Buffett nor do they have an edge or competitive advantage to hang on to their investments during times of distress. During those periods, hanging on to your investments is extremely painful, leave aside putting fresh money.

In my opinion, there are a couple of reasons why people panic during times of drawdown.

So, can you do something about those deadly drawdowns?

In my opinion, nothing much. Markets are supreme and they will do what they do and our job is to simply accept it. Markets will do something stupid that all your calculations and expectations will go down the drain. let me give you an example.

Since the global financial crises in 2008-2009, I have seen so many people advocate using a regime filter to reduce the overall drawdowns of the portfolio.

Simply stated, a regime filter alerts us when to be invested in the markets and when not to be. The logic is if the broader markets like NIFTY, SENSEX or NIFTY 500, is in an uptrend, you should be invested in the market & if the broader market is in a downtrend, you should stay out of it and park your money in some safe assets.

Now, logically it makes sense and it can help you to reduce your risk to some extent but I have two issues with it.

So my point is that no matter what you do, markets are going to throw up some new challenges and you just can’t escape from it. There is some truth in what Mr. Buffett says that you simply can’t avoid it.

Are there any solutions to avoid large drawdowns?

So don’t fear that drawdown. Embrace it, accept it and you will just be fine! 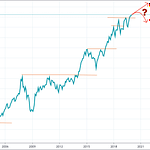 India VIX and its relation to the Stock Market.